It has been a while since our last blog posting at Foundation PWM. Our dealership change over the recent months, to our new Securities dealer Aligned Capital Partners Inc., has taken top priority over our laments on the markets, economies, investment fees, tax efficiency, and sound insurance planning, as focused our efforts on ensuring a smooth transition for our clients.

I have had many thoughts about what to discuss here, especially since the new dealership opens up many opportunities for our clients or potential clients in terms of the types of products we are able to offer. So that was one idea – a new product universe. Another thought was to look at the other significant advantages to working with our new dealer, which eliminate much of the conflict of interest that is inherent between an advisor and their firm with respect to clients, but there will be plenty of time to discuss these.  Given the recent events in the markets, I felt that there was a much more timely discussion that will be of interest to our clients as many questions, like “What the heck is going on?”, have been coming up in a lot of conversations lately.

At the beginning of this year we shared our thoughts on the markets, in particular our concern for Canada given the dependence on resources and high consumer debt levels. To view the full commentary just follow this link: The State of the Union - Looking Ahead in 2014.

Over the last three years, we have had continued concerns for the Canadian markets for three primary reasons:

It is my belief that these concerns were the main driver behind the recent market sell off. At this point, much of the returns that drove the S&P TSX to be the second best performing industrial market in the first half of the year have been virtually eliminated (see chart below). I would also posit that these are the three primary reasons that Canadian markets have been virtually flat since the rebound in the markets after 2008. 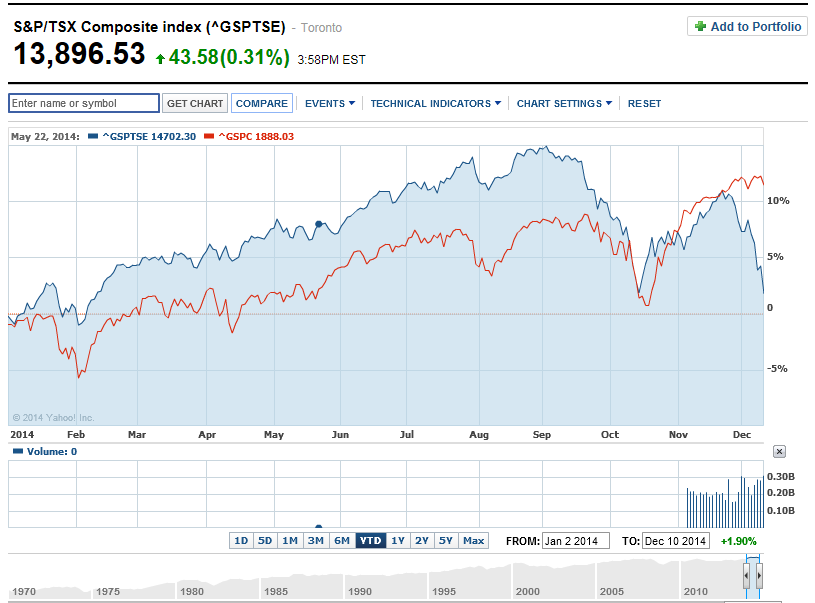 All of these points are at some level interrelated or dependent on each other, which is interesting because their connection has seemingly provided some kind of a compounding effect when it comes to negative market reactions. The blunt reality of this confluence of factors is that the Canadian markets lack diversity and competiveness on a global scale. We have addressed this lack of diversity in past but, to put the lack of competiveness in perspective, I refer this article published by the National Post on May 29th, 2012, written by Tim Shufelt:

“The World Economic Forum has ranked Canada in the 92nd percentile among the economic and policy environments required for a highly competitive economy. Yet output per hour worked in the business sector averaged just 0.7% annual growth over the past 10 years, opening up a competitive shortfall of 30% against the Untied States. Even during the last recession, which typically affords plenty of incentive for the business sector to operate leaner, Canada’s labour productivity slipped for the first time in eight recessions spanning the past 30 years, according to Statistics Canada.”

Finally, to pick up on the title of this blog, the shear impact of Canada’s lack of diversity was seen this week in the severe declines in energy stocks. Simply, by playing what seems to be a political game of “Chicken”, OPEC was able to hold the marginal producers of oil, like Canada, over a barrel (so to speak), in allowing oil prices to tumble. Since this is a major portion of the Canadian stock market, this lead our markets to tumble heavily as well, especially compared to more diversified markets like the S&P 500.  This can be clearly seen in the performance of the two markets over the last month.

What does this mean from an investing perspective going forward? For us, it means that the same trends are still well in place. Canada is looking to be continually volatile as a result of the three points laid out above. Despite the fact that their markets have continued to gain, the U.S. still looks to present the best opportunities going forward and we will (generally) continue to maintain an overweight allocation there. From a Canadian investors’ standpoint, keep in mind, when global volatility spikes the Canadian Dollar generally declines relative to the US dollar; thus, declines in US equities, held by Canadians, that are not currency-hedged are typically buffered by currency gains.

Looking over the last year, we are quite pleased with how our client portfolios performed - especially during the more volatile periods, like we have seen recently with the oil prices pulling back.  For economies like Canada, we will want to keep a close eye on the price of oil as we head into 2015.  A sustained price in the low $60’s would not be positive at all for the Canadian economy and could cause ripple effect into other sectors, if it hasn’t already. That said, if we do see prices rise to more normalized levels (that are more sustainable longer term for most oil producing countries), then it could present some good domestic opportunities in 2015.