“Tonight, this chamber speaks with one voice to the people we represent: It is you, our citizens, who make the state of our union strong.

And here are the results of your efforts: the lowest unemployment rate in over five years; a rebounding housing market a manufacturing sector that’s adding jobs for the first time since the 1990s, more oil produced at home than we buy from the rest of the world (the first time that’s happened in nearly twenty years), our deficit’s cut by more than half, and for the first time for the first time in over a decade, business leaders around the world have declared that China is no longer the world’s number one place to invest, America is.”

Rather than sending something out to kick off the year in January, I thought it appropriate this year to write up our viewpoints for 2014 after the State of the Union address, as there were a few things that were potentially going to be addressed that might impact Canada. Furthermore, it would give us an idea of what the largest economic powerhouse was going to focus on in this midterm election year. Perhaps most importantly, it gave us a month to reflect on the year thus far and one less month to be wrong about our predictions.

Over the last couple of years, as many of our readers know, we have been advocating for US equities, primarily for the three reasons Obama highlighted as to why America is the place to invest in the quote above.  Briefly, they are:  rebound in the US housing market, unemployment has declined, largely due to “reshoring”, and America is in the midst of an energy renaissance. These trends drove the S&P 500 to just over a 30% total return last year and our clients profited from the trade.

Lauding over the success of the last couple of years, 2013 in particular, will not put bread on the table, but we are certainly starting the year with more in our proverbial pockets. So, when we look out through 2014, despite the fact that our crystal ball is still on back order, I will highlight a couple of the key things that we are looking at that will help shape portfolio returns.  Feel free to discuss/ ask us any questions in the comments section below, or use these points as fodder for cocktail conversation starters.

As mentioned, the S&P returned in excess of 30% with the largest intra-year decline of only 6%. In short, there was a lot of upward movement without many bumps in the road. Putting this in context, the average intra-year decline is 14.4% over the last 36 years, based a JP Morgan study.  Expecting more of a return to the average, I think it is safe to say that we can expect more downside volatility this year with the potential for a peak-to-trough downturn in line with historical averages.  This certainly does not mean the year will end negative, just that it will likely be a bumpier road.

Looking at the US markets, we can likely expect a couple of percent return from dividends along with some earnings growth in line with or slightly ahead of GDP growth (expected to be between 2.5-4%), and a bit more upside in the price/earnings multiple. If things play out like this, it will bring us to a total return in the neighborhood of high single digits. Within the other developed markets growth is still slower than in the US, but there could be we could see multiples expand further as a result of an expected economic recovery, which could mean a nice surprise to the upside.

The emerging markets continue to generate impressive GDP growth, but this doesn’t necessarily mean that their domestic stock markets will follow suit. In 2013 we talked about some of the issues in the “BRIC” (Brazil, Russia, India and China) economies are facing, which are still present to varying degrees today.  More recently, Morgan Stanley has created the term “Fragile Five” (Brazil, Russia, Indonesia, India and South Africa), and discussed some of the risks associated with each of these countries here: Morgan Stanley Presents "The Fragile Five".  To summarize this article, each of these countries has a large current account deficit, which makes them more susceptible to the capital outflows from or the lack of inflows to their economies.  In other words these are the economies that will suffer the most from the trends Obama referred to when he talked about investing in America.

In China growth continues at a rate that is enviable of any developed economy, but there are still challenges ahead.  There is growing concern of the shadow banking system, predicated from the real estate boom and lending practices in China, fueling a hard landing for the economy. As we’ve discussed here before, the transition from a consumption driven economy will not be smooth. That being said, for over the last decade in advising clients on managing their portfolios, I don’t think a year has gone by where the soothsayers haven’t been worried about a hard landing in China.

In general, despite the ample space devoted to the risks in the emerging economies, we still feel like there are ways to profit from their economic growth by investing in large multi-national corporations, where there are currently far less risks than direct investing in these typically volatile markets.

Certain aspects of the Canadian economy continue to puzzle me, namely the enormously high consumer debt and a housing market that continues to roll on, seemingly defying gravity. It would seem that, at some point, these two elements could meet a crossroad that doesn’t have a favourable outcome, but I will certainly not be one to make a prediction on this. What I can say for the Canadian economy is that our resource-fueled growth, driven by the demand from emerging economies, probably hit its peak somewhere around the market collapse of 2008, which is strongly evident in the recent movement of the Canadian dollar. Given that our markets are primarily comprised of resource companies and financials, with the former exposed to the slowing emerging economies and the latter exposed to that which puzzles me, we will maintain a low weighting to Canada despite an inherent propensity to invest domestically.

The Elephant in the Room

Bonds.  They are a core component to any portfolio as they offer a measure of downside protection when equity markets go down.   They are the zig to the equity markets’ zag or, more technically, they offer portfolio diversification, which is an integral part of portfolio management. Usually, whether managing portfolios with an advisor or on your own, it is a question of “How much is appropriate?”

Over the last 30 years, bonds have not only been good for portfolio diversification, but also a strong contributor to the bottom line.  2013 marked a divergence from this and those with predominantly western government portfolios found that bonds to do not always generate positive results.  We are essentially entering a period where the management of bonds through a simple portfolio of laddered government bonds, a plain vanilla bond fund or government bond ETF may not be the best solution.  Now that the stimulus is slowing in the US and if we see that the US recovery is in fact self sustaining we could see yields rise and bonds generate losses.  For this reason we have been diversifying our bond portfolios away from interest rate risk and more to credit risk, insulating this key element of any client portfolio.

As I attempt to wrap this up, I would like to leave you with some two key thoughts for this year and the years to come. These are more frequently talked about when markets are dropping, and were certainly  mainstays of conversations in 2008, but I think they’re just as important, if not more important, to consider when things are going well: diversification and rebalancing.

It may seem counter intuitive to sell winners to add to losers, but can often be the cornerstone of successful investing. To highlight this, I have included below a slide out of the JP Morgan Guide to the Markets - Q1 2014.  The net result is that the diversified portfolio delivers solid performance with reasonable risk over time.  I would highlight that the returns on the diversified and more diversified portfolio both take into consideration the tech wreck at the start of the millennium and the great recession of 2008.

We wish you all a healthy and prosperous 2014, the Year of the Horse, for which I’m told should bring good fortune to horses, goats, rabbits and pigs. 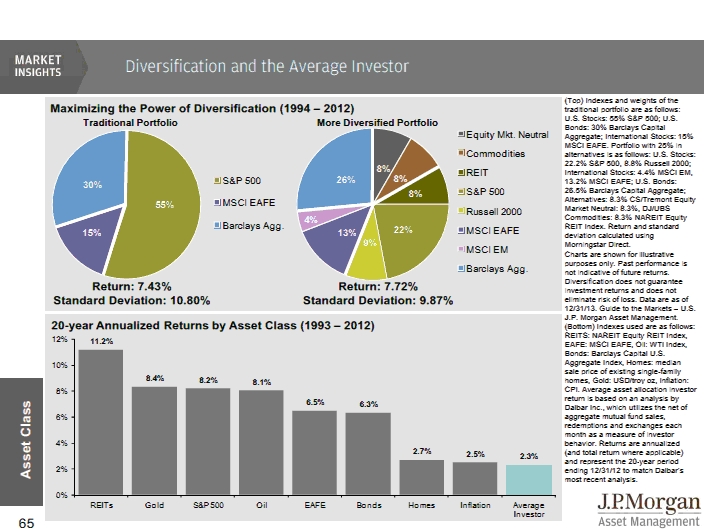