When Giants Grow Up, a Canadian Perspective

Over the last decade, global markets have been thrown into chaotic, disruptive, but beneficial upheaval as the new giants of the world grew up. In this I am referring to what were coined the BRIC economies by Goldman Sachs: Brazil, Russia, India and China. But as rapid growth rates drop and economies mature, what does this mean for the global economy and, most importantly, as Canadian investors what does this mean for us?

The magnitude of growth over the over the last couple of decades, which accelerated and peaked within the last decade, cannot be understated.  To illustrate this, below I have included a chart from the IMF displaying the share of world GDP between the advanced and emerging/developing economies. The relationship is quite stark. The emerging and developing economies have grown their share of world GDP from roughly 30% in the early 1990s to over 50% of world GDP today, surpassing the advanced economies. 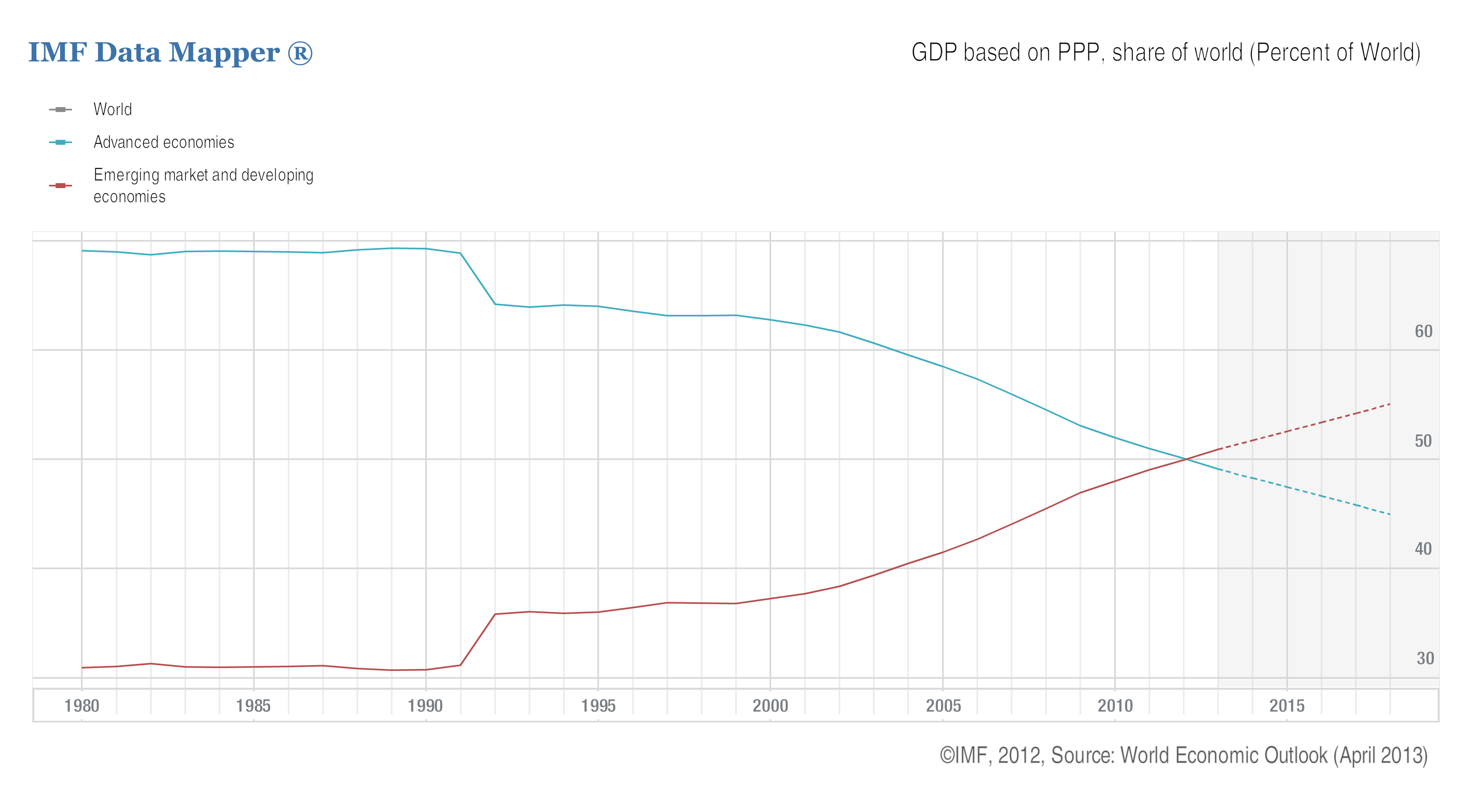 This outstanding level of growth has occurred, in large part, for one primary reason: these economies were playing catch up to the advanced economies. The phase of rapid growth is likely nearing an end for the BRIC economies, which represents a major portion of world population. There’s a second group of developing economies, coined the Next 11 (or N11) by Goldman Sachs, which includes Bangladesh, Indonesia, Mexico, Nigeria, and Turkey, but they account for only around 1.3 billion people – roughly the size of just one of India or China. This means the impact of the catch up growth from these economies is not likely to have the same global impact that the BRIC economies did.

The growth that lead the BRIC economies was also predicated in large part by export driven demand whereby, due to their lower input cost (predominantly labor), these countries became the manufacturing and outsourcing hubs of the world, benefitting everyone. With labour and other input costs increasing, this advantage has diminished for the BRIC nations while simultaneously improving the competitive position of other countries (like the US), as we have discussed in previous blogs. For these countries to continue to grow and move to the next phase of their economic development, they will have to transform their economies, which will be different for each BRIC. Brazil will need to deal with inflation and slow growth. India has the best potential of the BRIC economies; however, the current political stagnation makes it difficult to pass much-needed reforms. China will continue to catch up at a slower pace, but their success will be in the transformation from an export-driven economy to an internal demand-driven economy and unlocking their high savings rates. As for Russia, which greatly benefited from the resource boom created by China, it is more difficult to determine what will move them going forward.

As these economies transform to the next phase, we as Canadian investors will be required to adapt in the allocation of our investment capital. Canada has already felt the slowing of China and India, as decreased demand for Canadian resources has impacted corporate profits domestically, causing the stock market to correct. Going forward, in Canada, we will need to expand our infrastructure to deliver more resources to the areas of the world that need it if corporate profits are to increase. This means that the opportunities for investing in Canada will be limited on the resources side until the aforementioned infrastructure is in place.

With that in mind, of the best ways to participate in the continued global growth is through companies that sell consumer goods. As Chinese citizens purchase more consumer goods and the government shifts towards an internal demand-driven economy, world class companies of this sort will present excellent ongoing opportunities. Diversifying portfolios internationally will make a great deal of sense for Canadian investors as there limited options for these types of companies in Canada.

With that said, not all international markets will present opportunities. Looking at two other BRIC countries, Russia and Brazil, they have largely been driven by the same growth characteristics as Canada, and will not likely present great options going forward. So really, as Canadians, our best possibilities for equity investments in the near future will be to stick with markets that will participate in the ongoing growth consumer demand side of the equitation in the emerging economies, that being the BRICs and the N11.  In our opinion, the best way to access these companies is through the United States and, to a lesser extent for now, Europe. But the time is coming where that shift (from the US to Europe) could be the next one…